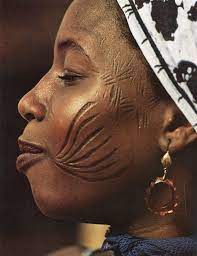 TRIBAL MARKS IN THE AFRICAN CULTURE

Many of my fellow African brothers and sisters now have tattoos of various foreign or European symbols on their skin. Typically, these symbols don’t fit with our cultures, customs, ways of thinking, or past. So I considered discussing scarification, which is considered a “ancient” form of tattooing in Africa. Africa, for one, has a vibrant tradition of scarification. Many people give the reasons that they would not perform scarification and that the practice has been discontinued as being HIV and ugly. I don’t agree or disagree with them, but I would want to explain the history of scarification and why, even if it is no longer used or necessary today, it is still an important part of our past. A lady or man would have scarification marks in the past to set them apart from others, reveal their status in their family, clan, and tribe, and denote their beauty or power. It was similar to wearing your identifying card on your face in certain African cultures. Though some people would dislike that, this was a symbol of pride rather than shame. As seen on sculptures in museums all around the world, it was a significant aesthetic and cultural element in the majority of African nations. In addition to being aesthetic marks, scarification patterns on sculptures also serve as family identifiers and, in certain circumstances, as a form of protection against evil spirits. Lastly, in Africa like in Polynesia, scarification is more visible on darker skinned people than say, tattoos.

How does scarification work? Scarification is the process of incising the skin with a sharp object, such as a glass, stone, knife, or coconut shell, in order to sculpt the scar tissue on various places of the body. Cicatrisation is a particular type of scarification in which a gash is formed in the skin with a sharp object, and the skin is irritated by the application of caustic plant juices, causing the formation of long-lasting blisters. In order to emphasize a wound, dark pigments like ground charcoal are occasionally applied. Upon healing, these injuries produce keloids, which are elevated scars. The Congo Basin and surrounding areas, as well as the Akan people of West Africa, are likely where the most complex cicatrization was discovered. Carification is a protracted, painful process that permanently alters the body and conveys nuanced messages about identity and social standing. Permanent physical alterations highlight societal, political, and religious responsibilities. Complex and beautiful designs depend on the artist’s talent as well as the subject’s pain threshold. In West Africa, facial scarification was used to distinguish between ethnic groups, families, and people as well as to display beauty; scars were viewed as enhancing physical beauty. It was also done on girls to symbolize various life milestones, such as puberty, marriage, etc. These scars helped to increase women’s attractiveness to men because they were seen as evidence that women could endure the pain of childbirth as well as being pleasant to touch and look at. Princesses used to have incredibly exquisite and detailed tattoos, notably in West Cameroon.
Queen Idia of the Benin Kingdom has two marks on her sculpted forehead. Men scar their chests in the Karo culture of Ethiopia to symbolize fighting foes from neighboring tribes; women with scars on their torsos and chests are viewed as being very sensual and beautiful.