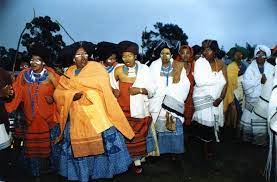 THE XHOSA OF SOUTH AFRICA

Who are the Xhosa people

The Xhosa, also often called the “Red Blanket People”, are of Nguni descent, like the Zulu. The name Xhosa is a generalised term for a diversity of proud clans, the Pondo, Bomvana, Thembu and the Xhosa tribe itself. Red and the orange of ochre were the traditional colours of the Xhosa, Tembu and Bomvana (“the red ones”). The first group of early Nguni immigrants to migrate to South Africa consisted of the Xhosa, (made up of the the Gcaleka, Ngqika, Ndlambe and Dushane clans), the Thembu and Pondo. However, a second group of Nguni-speakers joined these tribes later. These were the tribes that Shaka, the Zulu king, drove out of Zululand. Some returned to Zululand when peace was declared, but those who remained became known as the Mfengu and were assimilated into the Xhosa nation. The early immigrants formed the backbone of the Xhosa nation and have good reason to be proud. Not only were they to become the second largest group of Black Africans in South Africa but they were also the only ones that were never defeated or enslaved by any other tribe.

BETHANY ONLINE SCHOOL IS AN ORGANIZATION DEDICATED TO BRIDGING THE GAP BETWEEN LANGUAGE AND CULTURE. WE DO THIS BY OFFERING ONLINE CLASSES IN AFRICAN LANGUAGES. WE ALSO RUN A BLOG WHERE WE TEACH ABOUT THE AFRICAN CULTURE

Historical evidence suggests that the Xhosa people have inhabited the Eastern Cape area from as long ago as 1593 and most probably even before that. Some archaeological evidence has been discovered that suggests that Xhosa-speaking people have lived in the area since the 7th century AD. By the mid 17th century, the Thembu tribe was settled around the Nbashi River with the original Xhosa tribe settled in the vicinity of the Kei River and beyond. The senior Xhosa chiefdom was given respect and tribute but was not much feared. The senior chief did not have enough military power to make himself king of a larger centralised state. The chiefdom was further weakened when Rarabe, brother of the chief, Gcaleka, challenged his brother’s rule and was driven off with his followers. He was succeeded as senior western Xhosa chief by his son Ndlambe and later by Ngqika, his grandson, who took the chieftainship away from his uncle in 1796.

During the 1820s and 30s southern Africa was torn apart by violent wars between the different indigenous peoples, the so-called Mfecane/Difeqane (“The Crushing”). Two Nguni chiefs started these wars, Zwide of the Ndwandwe kingdom in the north of present-day Zululand (the area of KwaZulu-Natal lying north of the Tugela River) and Dingiswayo of the Mthethwa kingdom in the south. Refugees from both armies became new Mfecane tribes “on the march” and swept across the country crushing anyone who came in their path. When the British came to the Eastern Cape, they tried to prevent military invention by adopting a treaty-state system. Treaties of friendship tied Independent African states such as Ciskei and Pondoland to Britain. However, the treaty-state system did not last very long and war soon broke out between the White settlers and the Xhosa tribes. An allied army of Ngqika-Xhosa, Gcaleka-Xhosa and Thembu defeated the British. However, this did not deter the British from annexing the Keiskamma territory, thus setting the scene for yet another war which would eventually escalate into a civil war between Gcaleka, the Xhosa chief and the local Mfengu tribe that lived amongst them. In the wars against the British and colonial troops, two Xhosa chiefs, Sandile and Maqoma, emerged as strong leaders. After both had been defeated, Xhosa resistance crumbled and by the early 1880s, the last of the Nguni chiefdoms had been brought under colonial rule. However, what really broke the Xhosa nation’s resolve was a disaster that occurred in the mid 1850s. A young girl by the name of Nongqause had a vision of the warriors of old rising up from the reeds surrounding a pool into which she was gazing. They had been purified of witchcraft and they encouraged her to tell the Xhosa people to also purify themselves by killing all their cattle, destroying all their grain and not planting any crops. This action would also help to get rid of the White settlers, since the old warriors themselves would come to drive them away. News of Nongqause’s prophecy, spurred on by the preaching of her uncle Mhlakaza, spread among the people like wild fire. In the aftermath, approximately 20 000 people died of starvation while another 30 000 were scattered among the white farmers in outlying areas where they sought work for food. However, despite this disaster and the havoc it wrought on the Xhosa people, Xhosa culture has remained strong. Although their lifestyle has been adapted to the Western traditions, the Xhosa still retain many of their traditions and much of their culture. There followed long years of colonial rule, efforts to create self-ruling independent states during the Apartheid years and finally, independence in 1994 when the Government of National Unity under the leadership of Nelson Mandela was born.

What is Xhosa culture?
The earliest Xhosa homesteads consisted of a circular frame of poles and young trees bent and bound together in the shape of a beehive and covered from top to bottom with grass. During the early 1820s, traditional construction methods changed and huts were built with circular walls of coated stakes interwoven with branches and having thatched conical roofs. The individual huts that formed a homestead were usually built in a semi-circle around a circular cattle enclosure. Under the floor of the cattle enclosure, the Xhosas stored maize in bottle-shaped pits. The pits were well plastered and the openings closed with stones to prevent the maize from being spoilt. Although the maize gave off a bad smell and tasted sour, it was a good stand-by when food was in short supply. The cooking areas, on the outside of the houses, were screened off and consisted of a clay oven for baking maize bread and some bins for storing corncobs. The area between the door of the main house and the opening of the cattle enclosure was always neatly swept and was called the courtyard. Here the chief would hold court cases. Each homestead was an independent unit with its own livestock and lands. The Xhosa people enjoyed physical closeness and mothers carried their babies on their backs, close to their bodies, from the moment the baby was born. The Xhosa home was usually quite small and the family members lived in close proximity to each other. Friends were automatically included as part of the community and the family.

The Xhosa had a deep sense of community and would extend a helping hand to anyone in need. The way in which food was cooked, on an open fire in a cast-iron pot, where everyone could come and help himself/herself, was indicative of their sharing nature. Maize was the staple food. The Xhosa were also very fond of their beer, made from sorghum and maize.

What are Xhosa rituals?
Before a Xhosa male was recognised as an adult with the right to marry, he first had to go through the initiation process and be circumcised. Until such time, he was regarded as a boy and irresponsibility on his part was expected and condoned. Only boys who were considered ready were allowed to undergo initiation. The ceremony usually took place when the corn ripened, during the month of May. On the agreed day, the married women emerged at dawn and started building a grass hut for the boys. The boys waited in a secluded spot for arrival of the surgeon who would perform the circumcision. The boys were not allowed to utter any sound during the procedure. After the wounds had healed, the boys undertook excursions into the bush where they hunted. A small boy from their village accompanied each. Sometimes they would be joined by one of the senior and respected men from the village, who would teach them how to behave like responsible adults. This teaching included the rules of etiquette, the laws of respect and how to honour the ancestral spirits. At intervals, the young men staged dances, called Amakwetha, showing off their dancing skills while they proceeded from home to home. They disguised themselves in headdresses, wore heavy skirts of palm leaves and painted their bodies with white clay. At the end of the isolation period, the initiates were marched down to the river to wash themselves. Upon returning, their guide then placed a piece of fat on their heads and smeared it straight down their bodies and across their shoulders, in the form of a cross. After this ritual, the boys wrapped themselves in brand new blankets and turned away from the hut, covering their faces. All their possessions were thrown into the hut and then set alight, to prevent witches from taking possession of these things. They were also forbidden to look back. The amakrwala, as these boy-men were called, were then marched back to their parental homes where they were showered with gifts and a feast was prepared in their honour. After the feast was over, the young men went indoors where girls of their own age helped them to smear themselves from top to bottom with a mixture of oil and red ochre. Every day, for the following year, the boy had to refresh his red ochre. He also had to walk slowly to demonstrate his humility and to signify that he was still a “small’, unimportant man. While the males of the tribe underwent their initiation, girls of the same age had their heads shaven and were dressed in a specific manner for a few weeks. When the male initiates emerged from their isolation, the girls were recognised as being of marriageable age.

The traditional Xhosa was allowed to have more than one wife. Xhosa tradition made provision for a certain degree of contact and courtship between sweethearts but proper form demanded that girls remain virgins until they married. If a girl was not a virgin, her father would automatically receive less lobola (bride price) for her. Traditionally, the groom-to-be would abduct the bride, with the approval of her family, and then marry her. Today, marriage only involves the exchange of valuables. The bride’s father pays a dowry to his daughter’s future in-laws and the bridegroom has to pay lobola for the bride.