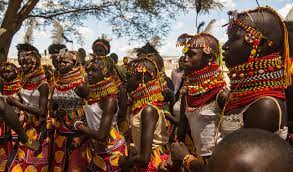 THE TURKANA COMMUNITY - HISTORY AND CULTURE

The Turkana are a Nilotic ethnic group who live in Turkana County, specifically around Lake Turkana. They are one of Kenya’s largest nomadic communities, famous for their basket making and yearly Turkana Festival. The Turkana are predominantly found in the counties of Turkana and Marsabit. Olympic champion Paul Ereng and supermodel Ajuma Nasenyana are two notable figures. The Turkana are thought to have moved from southern Sudan and lived near Lake Turkana, where they primarily tended livestock. In addition to pastoralism, those living near Lake Turkana and the Turkwel River engaged in fishing and farming.

The Turkana community’s main social unit was the family. The clan was made up of several families. Traditionally, the Turkana had a very distinctive alternating division, with the father belonging to the ngersai (leopard) division, the son to the ngimor (stone) division, and the son’s progeny to the leopard division. The females would join their father’s division until they married, at which point they would join their husband’s division. Due to their nomadic way of life, the Turkana do not have a centralized government. However certain social positions were granted to individuals based on their wealth, war skills, divination as well as positive personal qualities

Traditionally, they took care of the children and household duties. They excelled in making beaded ornaments and building new semi – permanent house for their families when they shifted as a result of their nomadic lifestyle. Traditional beaded head ornaments and necklaces, including some made from elephant’s tail, were worn by the women. A woman wearing an elephant’s tail necklace indicates that she is married.

Pastoralism, hunting, and fishing are traditional Turkana activities. Cattle, goats, camels, sheep, and poultry, particularly ducks, were raised. Their livestock provided milk, meat, and skins, which were used to make bags and clothes. Camels were regarded as a source of riches, and they were slaughtered at large rituals in exchange for brides or to demonstrate friendship.

One of Kenya’s top tourist attractions is the three-day festival held in June and takes place at Loiyangalani, Marsabit County. This festival features all nomadic communities in Northern Kenya. In addition, Tobong’ulore festival is held in Turkana county.

4 thoughts on “THE TURKANA COMMUNITY –”