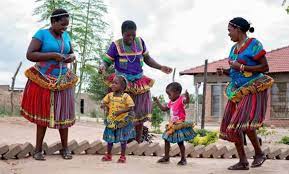 A Bantu ethnic group, the Tsonga are primarily from Southern Mozambique and South Africa (Limpopo and Mpumalanga). They converse in the Southern Bantu language of Xitsonga. Tsonga people can also be found in extremely tiny numbers in Zimbabwe and Northern Eswatini. The Tsonga people of South Africa and Southern Mozambique have a shared past and share many traditional customs, but their dialects are different.

The Tsonga people have been coming and going from South Africa for more than a thousand (1,000) years. They are thought to have come from Central and East Africa somewhere between AD 200 and 500. The Tsonga people first resided on the northern Mozambican coastal plains, but they eventually moved to South Africa’s Transvaal Province and areas near St. Lucia Bay starting in the 1300s. The Van’wanati and Vanyayi settled in the eastern Limpopo region between the late 1400s and 1650s, while the Tembe people settled in southern Eswatini at the same time. Separate migrations account for the majority of the Tsonga people’s historical movements. Separate migrations from various regions of Mozambique took place shortly after and especially in the 1800s. Portuguese sailors encountered Tsonga tribes close to the coast of Mozambique, according to historical documents gathered from the Portuguese (perhaps the first Europeans to ship to African soil in the 1400s) and Swiss Missionaries who arrived in Mozambique and South Africa in the 1800s. Early tribes identified are names such as the Mpfumo who belong to the Rhonga clan within the wider Tsonga (Thonga) ethnicity, and further identified during the 1500–1650 are the Valenga, Vacopi, Vatonga (Nyembana), Vatshwa, and Vandzawu. The Vatsonga people were much like a confederacy from very early on, where several clans established and assimilated within a specific area and adopted a language that varied depending on geographic location (dialect). The Thonga/Tsonga language has many dialects that date back to the 1200s or earlier, including Xirhonga, Xin’walungu, Xihlanganu, Xibila, Xihlengwe, and Xidjonga. They controlled vast territories in southern Mozambique and parts of South Africa, and they demanded tribute from travelers (paying tribute was to secure passage or to be spared from attack). When Great Zimbabwe was established, the Tsonga tribes also conducted trade and functioned as a confederacy by sending regiments to other groups in the northern Transvaal region.  The Tsonga have a long-standing practice of ruling their own tribes, with a senior traditional leader at the head of their own tribal organization and seen as having a rank equivalent to a king. The Tsonga people have long practiced these traditions, and they hold the metaphorical view that “kingship does not cross territorial or family borders” expressed in the phrase “vukosi a byi peli nambu.” A Tsonga “homeland,” Gazankulu Bantustan, was established in apartheid South Africa during the 1960s out of a portion of the northern Transvaal Province (now Limpopo Province and Mpumalanga), and it was given self-governing authority in 1973.