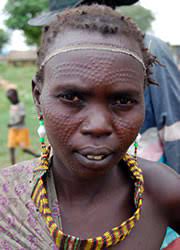 The Toposa are an ethnic group in South Sudan, living in the Greater Kapoeta region of the erstwhile Eastern Equitorial state. They have traditionally lived by herding cattle, sheep and goats, and in the past were involved in the ivory trade. They have a tradition of constant low-level warfare, usually cattle raids, against their neighbors.

The Toposa people live in Greater Kapoeta, beside the Singaita and Lokalyen rivers, and have a ritual center at Loyooro River. For seasonal grazing they migrate to Moruangipi and sometimes east into the Ilemi Triangle.  Toposa people also live in the southeast of Jonglei State. Their main settlements include Kapoeta, Riwoto and Narus. The land is semi-arid and rugged, with hills and ridges separated by shallow plains and seasonal streams. Vegetation is limited to shrubs and short grass. The Toposa mainly rely on cattle, sheep and goats, from which they obtain milk, blood, meat and leather. During the wet season the animals graze near the villages. When the rains end, the men take the herds to dry season pasturage then slowly bring them back, grazing along the way, to arrive in the village when the next rainy season starts. Some areas of good pasturage cannot be used because of lack of drinking water

The women also engage in limited agriculture in the river valleys. The main crop is sorghum, grown on fertile clay soils. Depending on conditions there may be severe shortages or large surpluses. The Toposa country has low, unpredictable rainfall. The streams are torrential, flowing only in the rainy season.

The Toposa language is a Nilotic language.(To learn an African language, check out Bethany Online School) It belongs to the Turkana group, which also includes Karamojong of Uganda, Nyangatom of Ethiopia and Turkana of Kenya. The Turkana and Toposa languages are so close that they are mutually intelligible. Other names for the Toposa language are Akara, Kare, Kumi, Taposa and Topotha. The Toposa economy and social life revolves around herding livestock, including cattle, camels, donkeys, goats and sheep. The Toposa also pan for gold and other precious minerals in the stream beds. Boys are first given care of goats and sheep, then graduate to looking after cattle when they come of age. They may travel considerable distances seeking water and pasturage. Possession of cattle, along with possession of a loaded gun, are the main measures of status and wealth. Cattle are central to Toposa culture. The Toposa share the habit of constant low-level warfare, mainly to capture cattle, with their neighbors. According to P.H. Gulliver, writing in 1952, “Turkana made war on all their neighbours with the exception of the Jie, with whom they occasionally allied themselves against the Karamajong and the Dodoth. Karamajong similarly made war on all their neighbors with the exception of the Dudoth, with whom they occasionally allied themselves against the Jie. Jie claim friendship with the Toposa, but since they have no common boundaries this would have been of little importance. Toposa and Donyiro did not fight each other, and are known to have formed an alliance against the Turkana. Toposa and Jiye were enemies.

Women are expected to remain at home farming, cooking, raising children and caring for the elderly. This division of labour can be inefficient. When an NGO introduced ox cultivation, at first they decided it would be easier to have men undertake the ploughing, although cultivation was women’s work, than to have women intrude into the men’s world of animal husbandry. Later they decided that women should be allowed to plough, but councils of elders rejected the notion. However, Toposa elders have limited power and the NGO went ahead and trained some women in ox ploughing, mostly widows and orphans. The experiment ended in 1985 when rebel forces arrived in the area, a disaster the elders naturally attributed to letting women manage cattle. There is no clear political organization among the Toposa, although respect is paid to elders, chiefs and wise men. Most decisions about the clan or community are made in meetings attended only by the men, traditionally held in the dark hours before the dawn. Matters of war and peace are decided by the sections councils of the elders, and the elders have sacral power over rain and drought.