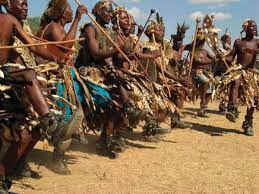 THE TONGA OF ZIMBABWE

The Bantu language family includes the Tonga. Chitonga is the name of their language. Many of the words are identical to those found in other Bantu languages including Bemba, Chichewa, and Luyana. The word kulemba means “to write” in all three languages. A’nkoko in Bemba, nkuku in Luyana, nkhuku in Chichewa, and inkuku in Tonga are all terms for a chicken. A traditional doctor is known as ng’anga in all four languages.

The Tonga have no written history from the time before British explorer David Livingstone arrived in the early 1850s. But like many other peoples in Africa, they have a rich tradition of oral history and folklore. In almost all the villages, elders are the keepers of mythical stories. The stories, usually with animal characters, are told around a fire at night. They convey traditional principles, values, and customs, as well as the origins of the Tonga people. One of the stories deals with the beginning of Tonga society. A local tradition suggests that before the arrival of the British there was a powerful chief in the town of Monze. According to oral tradition, the first Monze chief descended from heaven. He called the Tonga people to join him and settle in his chiefdom. Most people liked the chief because he had the power to heal, to cause rain, and to keep the peace. He did that by frustrating enemies through his communication with the spirits of the ancestors.

In traditional Tonga society, there is a well-developed cult of the “shades,” or muzimu. It is believed that at death each person leaves a shade or spirit, a muzimu. The muzimu commutes between the spirit world and the world of humans. Witchcraft and sorcery are also part of traditional beliefs. Many Tonga have been converted to Christianity because of missionary work by Europeans. Missionaries demanded that the Tonga and other people give up traditional beliefs and practices such as polygamy (having more than one spouse), ancestor worship, and witchcraft. At first, there were only a few converts. In modern times, many Tonga practice both Christianity and traditional religious beliefs.

The major national holiday in Zambia is Independence Day on October 24. Zambia obtained its independence from Great Britain on that day in 1964. During this day every year, celebrations are arranged in major cities and throughout the countryside. There is much drinking, dancing, and singing. In the afternoon, people gather in stadiums to watch soccer matches.

In the past, most Zambian peoples had special initiation ceremonies and education for children as they reached adolescence. The Tonga did also, but their initiation ceremony was simpler than most. A girl trained for her future role as a man’s wife. Usually, there was a period of living away from the village, and a short ceremony marked the girl’s maturity. She was given a new name to signify her adult status. A prospective husband had to pay bride-wealth to the family of his bride-to-be, usually in the form of cattle. After marriage, a couple lived in the husband’s village. Polygamy (having more than one spouse) was traditionally encouraged, but this practice is dying out. Among the Tonga, there is a strong belief that children must be taught and trained for adult life. Children are taught proper manners by older people. During their teenage years, boys and girls are encouraged to do their separate chores according to their sex. Girls’ chores are to draw water from wells and fetch firewood, while boys hunt small game and fish. But there are times when boys do girls’ chores, and vice versa.

Girls and boys who have not reached adolescence are encouraged to play together. People talk freely in the presence of children about matters such as menstruation, pregnancy, and childbirth. Most parents feel that sexual play between children of the same age is not a matter for concern. However, an older man or woman is not permitted to have a sexual relationship with a girl or boy. When a boy who has reached adolescence decides to marry, he can find his own bride. However, he must tell his parents and uncles so that they can negotiate with the parents of the girl, since bride-wealth must be paid. Married women are expected to respect and cook for their husbands, and men are expected to take care of their wives. In the presence of men, a woman is expected to observe traditional female etiquette such as looking downward and behaving humbly. Women are also expected to dress modestly, especially keeping their knees and thighs covered. However, in the cities many women have tried to maintain independence and resist men’s control. Many stay single and earn their own living at a regular job or by doing some type of home-based work.

In colonial times, the Tonga participated fully in agriculture as a business. Early on, they were one of the few peoples to accept agricultural improvements such as ox-drawn plows and the use of fertilizer. Thus a relatively wealthy group of Tonga commercial farmers developed. There also developed a series of smaller cities along the railroad line, which helped create a rich class in the cities as well. Today, these Tonga have modern homes and, occasionally, cars. In rural areas, people live in isolated homesteads or villages consisting of a few huts. In most cases, houses, granaries, and cattle kraals (corrals) are temporary structures that can be easily left behind when new fields must be cleared. With the coming of commercial farming and a cash economy, some modern, durable houses have been built. Their roofs are corrugated iron sheets. As in other parts of Zambia, tropical diseases such as malaria, bilharzia, and intestinal worms are quite common among the Tonga.

Similar to many African societies, family among the Tonga extends to the wider extended unit rather than the nuclear family of wife, husband, and children. The extended family, much like a clan, shares many tasks, including farming and the provision of food. In times of trouble, such as famine and drought, the extended family serves as a safety net.

Bearing as many children as possible is important in a Tonga marriage. Children are valued for their labor and as “social security” for parents in old age. There is a feeling nowadays that modern city life has made families less stable and that the divorce rate is much higher than it used to be. Many women are staying single and breaking away from the traditional rules that kept women in a lower position.

Clothing among the Tonga is used to differentiate the sexes. As soon as children begin to run about, girls are given a dress or a skirt, while boys are given a shirt and a pair of shorts. Children are taught that boys and girls wear different types of clothes; thus, dress marks the beginning of sex identification. Some women in the cities do wear pants and shirts, but most women still prefer traditional women’s clothing.

Most of the area in which the Tonga live is rural. Most people follow a subsistence way of life, growing food mainly for their own needs with little left over. Maize is the main staple; others include millet and sorghum. The diet consists of inshima (thick porridge), eaten with either meat and gravy or vegetables such as beans and pumpkin leaves. A group of relatives eat from the same dish. With their fingers, they break off a piece of inshima and dip it in gravy before eating it.

Most parents send their children to a nearby primary school. At school they learn a few basic subjects such as English, biology, and arithmetic. After eight years of primary school, some students are selected to attend high school, which is modeled on the British system of education. Subjects may include mathematics, chemistry, physics, and biology. The few lucky students who do extremely well in government examinations are selected to attend the university or different types of colleges. In 1976, the government of Zambia made education free in the hope that more people would take advantage of this opportunity. The result has been a great increase in literacy (ability to read and write). Some parents, especially in the cities, value education highly and have great hopes for their children. In rural areas, however, children’s labor is viewed as more important to daily living.

Music, dance, and literature are part of Tonga daily life. Grandparents tell stories around the evening fire passing on knowledge and principles to the children. Each story can have several different lessons for both the young and the old. The lessons may be as varied as how to act clever, how to be imaginative, how to be smart and get a beautiful girl’s attention, how to be successful by working hard, and how to behave in certain situations.

Most of the Tonga people are subsistence farmers, with only a little surplus food to sell for money. They also raise cattle and goats. Livestock add to the diet but are mainly a source of wealth. Cattle are also important in paying bride-wealth for marriage. Some local farmers who have adopted Western farming techniques have become relatively wealthy and are in a special class of their own. Many educated city people find jobs in the government. Others find jobs as teachers, nurses, or office workers, Some work on the railway. Others sell fish, salt, sugar, and other basic products in open markets.

Even in the most remote parts of Tongaland, soccer (locally called “football”) is the favored sport for boys and young men. There is usually a makeshift soccer field in each village. Whenever a ball is available, boys play soccer until they are exhausted. Schoolgirls like to play netball, a game somewhat like basketball. In well-equipped high schools, boys and girls participate in sports familiar to students in the West, such as tennis, badminton, and gymnastics. In rural areas, boys and girls make up games and play together when they have free time from household chores.

The most popular game among boys and girls who have not reached adolescence is playing house. Children build playhouses at the edge of the village and pretend they are adults. Girls take on the roles of women, and boys the roles of men. Girls do the cooking and boys come to eat the food. Although game is rare, men still like to go out hunting and fishing in the nearby woodlands and rivers. Drumming, singing, and dancing at beer parties, funerals, and naming ceremonies are frequent activities among the Tonga. At beer parties, men and women dance together.

Pottery, carvings, baskets, and mats are crafted by older men and women for use in their daily lives. Pots are made in various sizes for drawing water, cooking, brewing beer, and storing grain and other foods.

At the time when Zambians were demanding independence from British rule, one of the most famous politicians in Zambia was Harry Nkumbula, a school teacher from Tongaland. Alongside Bemba-speaking leaders such as Simon Kapwepwe and Kenneth Kaunda, he opposed colonial rule. In time, Nkumbula lost the support of Kaunda and Kapwepwe. He was pushed aside in the new, independent Zambia. Naturally, the Tonga were not pleased. Nkumbula continued to draw support from his ethnic group. It became a political force against President Kaunda. Although the government of Kaunda did not punish the Tonga openly, few Tonga were invited to join in national politics. Despite the ethnic hostility between the Tonga and the government leadership, however, human rights in Zambia have generally been better than in other African dictatorships.