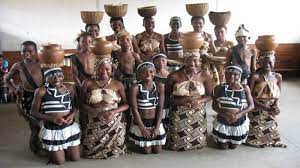 THE SHONA OF ZIMBABWE

Shona is a culturally similar Bantu-speaking people who live primarily in Zimbabwe’s eastern side, north of the Lundi River. Representing over 80% of the population, the Shona tribe is culturally the most dominate tribe in Zimbabwe. The Zezuru, Karanga, Manyika, Tonga-Korekore, and Ndau are the main groups. The Shona cultivate millet, sorghum, and corn (maize), the latter of which is their main crop, as well as rice, beans, peanuts (groundnuts), and sweet potatoes. Cattle are retained by most groups, however they are mostly kept for status, as a store of money, and for bride-price payments, despite the fact that they are useful for their milk. Villages are often made up of one or more interconnected families and consist of grouped mud and wattle homes, granaries, and common cattle kraals (pens).

Traditionally,Shona people live in isolated settlements, usually consisting of one or more elder men and their extended families. Most decisions are made within the family, although organized political states were recognized as a source of centralized power. A principal chief who inherited his position and power in the same divine manner as a king headed them. He usually lived in a centralized location and was complemented by his court that advised him about most important decisions. The head chief often received substantial payment in the form of tributes from his constituency.

The Shona believe in two types of spirits. Shave spirits are most often considered to be outside or wandering spirits and vadzimu are ancestor spirits. Shave spirits are connected to populations living outside of Shona territory and may be connected to neighboring people. These spirits may be either malevolent or benevolent. Bad spirits are associated with witchcraft, while good spirits may inspire individual talents associated with healing, music, or artistic ability. Vadzimu represent all that is ideal and moral about a Shona way of life. They are usually associated with recent ancestors or with more remote culture heroes whose exact genealogy has been forgotten. They serve to protect society, but may withdraw this protection if the Shona moral ideals are not respected

The Shona moniker was given to the people of this area who spoke multiple mutually intelligible languages in the late nineteenth century. The Shona Tribe of Zimbabwe has a rich artistic legacy that includes colorful fabric painting with sadza, despite their reputation for stone carving. Sadza (pronounced sudza) is a type of maize that is a staple of their cuisine.
Maize (corn) is ground into a fine meal, which is then boiled with water until it reaches a mashed potato consistency. Sadza is commonly served with a vegetable or meat sauce to give it flavor, despite the fact that it can be eaten plain. As a masking between the two paint colors, the sadza is used instead of wax in this painting style. The canvas is left to dry in the sun. Finally, the fabric is washed to remove the sadza leaving it with a unique finished appearance. Designs often use traditional geometric patterns mixed with stylized objects from everyday Shona life

Shona artist are well known for their stone sculptures and are typically called “Shona” sculptures because it is the name of the tribe in Zimbabwe that has traditionally created these works of art. The stone carving has been part of the Zimbabwean culture since 1200 AD when Great Zimbabwe, an archaeological masterpiece of their early ancestors, was built.
The re-emergence of this stone carving tradition in the 1950s, the solid forms and beautiful surfaces of Shona sculpture express an extraordinary emotional power”. Today the art form commands worldwide recognition with the world’s most talented carvers being recognized in Zimbabwe  The Shona sculptures are produced from a variety of stones. Serpentine stone, with its considerable range of colors and hardness, is the material most commonly used by the sculptors. Most serpentine stone used was formed over 2.6 billion years ago. Serpentine stone exists in a diversity of colors including black (the hardest and least common), browns, mauves, greens, and yellows. Sometimes sculptures are also made semi-precious stones like “Leopard Rock” and Verdite. Drawing on ancient sculpting traditions they have produced a modern art movement of dignified, exquisite works. Reminiscent of Picasso and Henry Moore, these extraordinary, intense works speak to all humanity.

AS A WAY TO SUSTAIN THIS CULTURAL HERITAGE. BETHANY OFFERS CLASSES THAT TEACH THE SHONA LANGUAGE AND CULTURE

EMAIL: info@bethanyonlineschool.com  TO GET STARTED