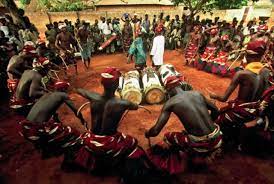 WHAT IS THE ROLE OF MUSIC IN THE AFRICAN CULTURE

Music is a significant part of African culture. In fact, it is the only thing that has been passed down from generation to generation for centuries. The music in Africa can be divided into two categories: traditional and popular music. Traditional music includes songs and dances and stories and poems with rhythms and melodies that last for hours or days on end until they are finished with a huge celebration. Popular music is what we typically think of when we hear the word “music” — African artists singing about their own lives, which include joys, sadnesses, challenges, triumphs, life’s lessons learned through age-old wisdom traditions such as proverbs or parables handed down orally from one generation to another.

Why is music important in African culture?

Music is very important in African culture. It can be used to tell a story or convey meaning and messages. Take, for example, the well-known song “Kundi M’Bana” by Rochereau Tabu Ley: This song was written about Mobutu Sese Seko’s time as president of Zaire (now called Congo). During his reign he banned all music except that which glorified himself. The lyrics are cleverly disguised references against him but are also beautiful songs about longing for home while living abroad.   Another example would be  the song “Yenzu Ilanga” by the legendary Congolese band Zaiko Langa Langa. The lyrics are completely in Lingala, a Bantu language of central Africa that is not understood outside of the Congo region. Yet, this does not stop people from enjoying it all over the world because they can still hear the music and feel its meaning through their hearts even if they do not understand what is being said on stage during live performances or on recordings.

How does music play a vital role in African culture?

In Africa, music serves as more than just an art form—it’s used for medicinal purposes . In fact, some people believe that how someone responds to certain types of songs affects their personality type . Songs are played throughout many African cultures at weddings , birthdays , funerals , national holidays , religious ceremonies, parties and other events.  For instance, in Nigeria traditional masks called “igba-ntu” are accompanied by percussion instruments like drums when performed during important rituals such as marriage ceremonies.  In Mali, traditional music is used to pass on knowledge about the history of their people. It’s also believed that singing can cleanse a person of bad spirits.

How are music and dance related in African culture?

It is important to note that while music and dance are not the same thing, they often work together in African cultures. Music can be described as any sounds made with human vocal cords or instruments; some examples of types of music include classical, pop, rock, hip-hop, country and folk. Dance is a type of physical activity involving rhythmic movements like stepping or swaying that usually takes place to musical accompaniment. Music has played an integral role in many African societies for hundreds if not thousands of years. Different tribes had their own individual songs related to hunting rituals or courtship practices at different times throughout history until today when these traditions continue during cultural celebrations such as weddings. It was traditionally believed by Africans that people who could sing were very special and had a connection to the spiritual world.

What are the important characteristics of African music?

There is no single answer. It’s difficult to generalize all across the continent because each culture has different values, cultural norms and practices that influence their musical traditions.  However, there are some common characteristics found throughout most traditional African music: polyrhythms; call-and-response (a vocal or instrumental interaction between two musicians); ostinato (the repetition of a rhythmic pattern like an interesting drum beat) and improvisation.  These elements can be heard in popular genres such as rap, hip hop and jazz which have roots from African rhythms.