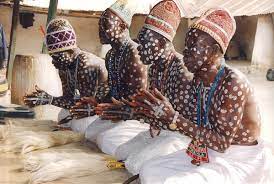 THE RELIGIOUS ORGANIZATION OF THE YORUBA COMMUNITY

The monumental work of Idowa on Yoruba religion has continued to be a major reference work.15 Again, satisfactory groundwork has been done by many other scholars of anthropology, sociology, theology, philosophy, history, comparative religion and others. In this circumstance, it is not always necessary to reinvent the wheel. We shall, therefore, draw liberally but critically from these scholars, including our own works. Although many will find some aspects of this paper to be familiar, we should re-iterate that we are not wheeling out the familiar arguments of previous scholars unguardedly. The discussion in this paper is intended primarily to state some of the aspects of Yoruba religion that have survived in Santería and Candomblé‚. We should also point out that it is almost impossible to summarise Yoruba religion in a short paper such as this. Consequently, we intend simply to examine the fundamental elements of the religion, especially those that have survived in the diaspora. The situation in Yoruba religion is a near representative of the situation in the whole of Africa when the elements of Afrel come into sharp focus. In many parts of Africa, there is a belief in a Supreme Being with varying degrees and emphasis. Again, in some parts of Africa, as in Sierra Leone and Central Africa, the divinities are almost absent, and ancestors are predominantly pre-eminent, whereas in some other parts, such most of West Africa, the situation changes and the divinities are more pronounced.16 Also, the incidence of psychic phenomena is more noticeable in some areas than others, and the same goes for the practice of magic and medicine, including divination. However, all these phenomena are found among the Yoruba as we shall develop below. In view of the above, we should state immediately that some of the central issues in Yoruba religion can be understood in terms of five fundamental beliefs or basic themes which Idowu has described as the structure of Afrel.17 These include belief in God; belief in divinities; belief in spirits; belief in ancestors; belief in mysterious powers.18 The scholars who have continued to be concerned with this position are many, and they are not nervous, but confident in putting forward their views. It is in this broad objective approach that we turn to the fundamental beliefs in Yoruba religion.

(i) The Supreme Being

The Yoruba name for the Supreme Being is Olorun or Olodumare. The first name, Olorun, translates easily to mean “the Owner of heaven” or the “Lord of heaven.”19 This depicts God as the Author of all things, visible and invisible, the Head or Overlord of all in heaven and on earth.” Because the name is associated with orun (heaven, sky) some scholars have erroneously concluded that God is distant and remote. Indeed, the name Olorun is constantly found on the lips of the Yoruba and it is used in greetings: “Have you risen well?” “I thank God.” It is found in ejaculatory prayers: “May God take care of us throughout the night;” “Deliver me, O Olorun!”21 The name is also commonly used in sayings and proverbs: “It is Olorun, the King, who pours down the rain in regular flow;” “Olorun’s works are mighty;” “Only Olorun is wise;” “Whatever do you do in concealment that Olorun’s eyes do not reach?;” “He is under the judgment of Olorun.”The popular use of Olorun for the Supreme Being made it attractive and acceptable to Islam and Christianity, and the name has been used successfully in evangelism. It is wrong to suggest that “this idea of God was borrowed from Muslims or Christians. . . The new religions adopt and enrich the name of God, but do not introduce it as something new.” The name even appears in many Yoruba incantations (ofo), a fact that attests to its being indigenous to the Yoruba. The following excerpt will suffice: