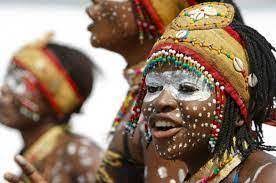 An ethnic group known as the Mongo inhabits the equatorial jungle of Central Africa. They are the second-largest ethnic group in the DRC and have a significant regional influence in the north. Comprised of a variety of sub-ethnic groups, they are primarily found in an area south of the main Congo River bend, north of the Kasai and Sankuru Rivers, and in many other provinces. The northern regions of the Bandundu Province and Équateur Province are where they are most prevalent.

Despite their diversity, the Mongo people hold a similar legend in which they claim to be descended from a single progenitor with the name Mongo. They have variances as well as commonalities in their social structure and language. An important corpus on the Mongo people was first published in 1944 by Vanderkerken, who was the governor of Equateur at the time. Anthropologists originally postulated the Mongo unity as an ethnic group in 1938, mainly by Boelaert. The Mongo language is what the Mongo people often use (also called Nkundo).
In urban areas, however, Lingala is frequently used in place of Mongo. About 200 varieties of this language exist, and they are grouped regionally and according to sub-ethnic groupings of the Mongo, including Bolia, Bokote, Bongandu, Ekonda, Iyaelima, Konda, Mbole, Mpama, Nkutu, Ntomba, Sengele, Bembe, Songomeno, Dengese, and Tetela-Kusu, Bakutu, Boyela, Lok

The origins of the Mongo people are unknown, although they most likely arrived in northern and western Congo during the first millennium BC and settled along the hot, humid, and rainy river basins. By around 1000 CE, farming of food staples like yams and bananas was probably well established.  The Mongo people’s customs, culture, and religious beliefs were influenced by Belgian colonial control, and most of them converted to one of the many different Christian faiths practiced in the Congo. The Christian Mongo people harbor profound anger toward the influence of Islamic missionary activities from northern Africa, which has resulted in a history of confrontations between them and several Muslim ethnic groups found in nearby northeastern Congo. Alexander Reid claims that the Mongo people suffered during the active slave trade, export, and trade for slaves in the 18th and 19th centuries, when “thousands of Mongo people traveled through the Zanzibar route as seized slaves by the Arabs.” According to Patrick Harries and David Maxwell, the Mongo people were subjected to a system of servitude and the slave trade before European colonization. This system was largely driven by Arab conquests. Over the course of colonial history, the Mongo people were wiped out by the entry of Belgium as a colonial power, its Leopoldian exploitation model, and imported diseases like sleeping sickness and syphilis. The establishment of cocoa, coffee, rubber, and plantations as well as the capture of animals for pets and zoos during the colonial era also brought about an ecological and economic transformation.

The Mongo people, like nearby ethnic groups, farm cassava, yam, and banana as staple crops because they reside in equatorial jungles. Gathering wild plants, edible insects, seasonal vegetables and beans, fishing, and hunting serve as supplements to this. The patrilineal society is originally built on a joint family unit called a “Etuka” that has twenty to forty individuals and is descended from a line of ancestors.  The male Etuka elder is referred to as Tata (meaning father). A Mongo village is made up of several Etuka. Covenants and disagreements between lineages were frequently settled through trade or intermarrying. Instead of being a collection of lineages, some sub-ethnic groups located in the southern areas of Congo had a chief, who was known as Bokulaka. The Mongo people’s traditional religion consists mostly of ancestor worship, natural spirit worship, fertility rituals, and shamanic techniques like magic, sorcery, and witchcraft. Richness and high sophistication are demonstrated by the artistic accomplishments, songs, instruments, and sculptures of the Mongo. The oral tradition has been employed by the Mongo people, like many other ancient societies, to preserve and pass on information to subsequent generations. Even in the current era, polygamy has persisted in Mongo society, despite missionaries’ efforts to eradicate it once they converted to Christianity. Jupiter Bokondji, a musician, is of Mongo origin.