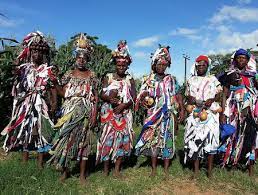 THE LOMWE OF MALAWI

Click here to read about other tribes in Malawi

One of Malawi’s four largest ethnic groups, the Lomwe have migrated across the border into Mozambique in the past. Due to tribal conflicts in Mozambique, a large number of Lomwe migrated into Malawi at the end of the 19th century and mixed with the Chewa in the 1930s.While there are vestiges of the Kokholha dialect in some places, such Thyolo, the Elhomwe language that is spoken in Malawi is mostly a Mihavane dialect. The Akafula, also known as the Mwandionelapati or Abathwa, were the original indigenous of Malawi, unlike the Lhomwes, who, like all main tribes of Malawi, are not native to that country. By airing news in Elhomwe on MBC radio 1, the Malawian government has taken a step toward maintaining the language. Another significant event was the founding of the cultural organization Mulhako Wa Alhomwe by the late president of Malawi, Bingu wa Mutharika, on October 25, 2008. The Mulhako Wa Alhomwe’s administrative center is located in the Mulanje District in Chonde. It was established to protect Lhomwe traditions, values, and language. It houses an Elhomwe school and a library.

Despite not being mutually inteligible with other Lomwe dialects spoken in Mozambique, the Elhomwe dialect spoken in Malawi has a lot in common with them, including vocabulary.
For example, the word forms otchuna (Emakhuwa), onthuna (Lmeeto), and ohuna (Elhomwe), which all mean “to wish,” are similar. Anamwaani (Emakhuwa and Elhomwe), andanumwane are the words for “women,” respectively (Lmeetto.  A tonal language, Lomwe (Elhomwe) contrasts toneless syllables with high-toned ones (H). The position of the H tone in nouns can be somewhat unpredictable, especially in terms that were adopted from Chichewa. There is no tonal distinction between one verb-root and another in verbs (i.e., there is no distinction between high and low-toned verbs as in some other Bantu languages), but Kisseberth & Mtenje identify a variety of tonal patterns associated with various tenses in the dialect they study (Emihavani). For instance, the negative subjunctive has a H tone on the verb final (o-hi-vitikelelé “you shouldn’t twist”), the conjoint past continuous has a H tone at the beginning of the macrostem, and so forth

BETHANY ONLINE SCHOOL IS AN ORGANIZATION THAT SEEKS TO BRIDGE THE GAP BETWEEN LANGUAGE AND CULTURE BY TEACHING AFRICANS IN THE DIASPORA AFRICAN DIALECTS.