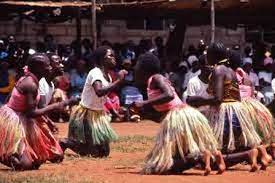 THE KISII COMMUNITY - HISTORY AND CULTURE

A look into the history and culture of the Kisii

The Kisii (also known as Abagusii or Gusii) are western Bantu speakers. It is said that they took their name from their founder and patriarch Mogusii. They are known for soapstone carvings and  farming of bananas and indigenous vegetables. One of the most notable people from this community is the long-distance runner Naftali Temu (20 April 1945 – 10 March 2003), who won Kenya’s first gold medal at the 1968 Olympics in Mexico City.

The Kisii are believed to have entered western Kenya from Uganda. They later moved from the foothills of Mount Elgon, settled for a while in the Kano Plains, then migrated to their present settlement in Kisii and Nyamira counties. In the course of their migration, the Kisii are believed to have interacted with, and borrowed cultural aspects from, the Maasai, Kuria, Luo and Kipsigis

The Kisii believed in a supreme God called Engoro, who created the universe and all natural forces. They believed He was the source of life and property, and governed the destiny of man. He would send rain or drought, plenty or famine, health or disease, peace or war, depending on whether man lived a good or bad life. He revealed Himself in storms, thunder, earthquakes and lightning

Traditionally each clan had a clan leader who was in charge of making decisions on behalf of the clan. The family head was responsible for making the daily decisions in and around his homestead

Amongst the Kisii, initiations were gender-segregated, and the operations performed by female and male circumcisors. There was a period of seclusion for both genders. The circumcision rite involved training the initiates to know rules of shame (chinsoni) and respect (ogosika). Girls were circumcised at the age of seven or eight, and boys a few years later.
In Kenya today, female circumcision is illegal and communities are encouraged to adopt alternative initiation practices

Traditional marriage was established through the payment of bride wealth in the form of livestock and money. Bride wealth was paid by the husband to the wife’s family. This act established a socially approved marriage. Traditionally, divorces were rare and required the return of the bride wealth. Upon the death of a husband, the widow chose a husband from among the dead man’s brothers.
Ancestral spirits and funerals

The Kisii believe in ancestral spirits. In the past, displeased ancestral spirits were believed to be responsible for diseases, the death of people and livestock, and the destruction of crops.
The Kisii conduct funerals at the departed person’s homestead, where a large gathering is a sign of prestige. Christian elements, such as catechism-reading and hymn-singing, are combined with the traditional practices of wailing, head-shaving and animal sacrifices

Traditionally, the Kisii were mainly farmers, growing crops such as finger millet, sorghum, beans, sweet potatoes and bananas. The Kisii also made soapstone carvings, basketry and pottery. They traded with their neighboring communities for tools, weapons, crafts, livestock, and agricultural products

Craftsmanship: soapstone carvings
Today, the Kisii soapstone carvings have received international recognition. The stone is mined and carved in Tabaka, South Mugirango, where several families specialize in this art. The craft attracts tourists and generatesincome for the community

Recreation activities of the Kisii

The Kisii celebrations are marked with song and dance. Various traditional musical instruments, including the Obokano (lyre) and drums, are played during such occasions. During leisure time, the men drink traditional beer and smoke pipes