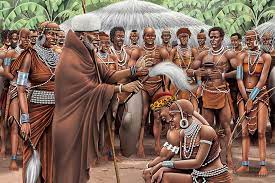 THE KIKUYU OF KENYA

The Agikuyu community of Kenya are a central Bantu community. They share common ancestry with Embu, Kamba, Tharaka and Meru. Traditionally they inhabited the areas around Mount Kenya inclusive of counties such; as Muranga, Nyeri, Nyandarua, Kirinyaga and Nakuru. They are among the communities that championed for the independence of Kenya

After the arrival and settlement of the Agikuyu around Mount Kenya they assimilated with the Gumba who were a community of hunters, smelters of iron, experts at pottery and used honey and honey products. The Agikuyu went on to learn the skill of iron making from them. As the population of the Agikuyu increased they dispersed to different areas around the slopes of Mount Kenya.

The Agikuyu believe in a supreme God ‘Ngai’ who lives in Mount Kenya. The name Ngai means ‘the one creator’ to whom they offered sacrifices to at designated places such as the top of hills, Mount Kenya and under specific trees. The sacrifices were conducted by specific people.

The Agikuyu believe that Ngai created the first man (Gikuyu) and the first woman (Mumbi) whom they trace their ancestry to. One day Ngai appeared to Gikuyu and allocated him all land south-west of Mount Kenya currently Kirinyaga county. Gikuyu then built a homestead at Mukurwe wa Nyathanga in Murang’a. This place is considered sacred and has a lot of fig trees. Mukurwe wa Nyathanga is a gazetted cultural site.

Mumbi and Gikuyu were blessed with nine daughters: Wanjirũ, Wambũi, Njeri, Wanjikũ, Nyambũra, Wairimũ, Waithĩra, Wangarĩ, and Wangũi but no sons. When the daughters were ready to establish their own families, their father prayed and sacrificed to Ngai under a fig (Mugumo) tree. The next day nine men appeared under the Mugumo tree and married the nine daughters. They became the ancestors of the nine Kikuyu clans.

The work of the medicine man

Medicine men (mundu mugo) were once influential members of the Kikuyu culture. They were consulted regarding the future, as well as for healing and protection against bad omens. The medicine men’s principal tool was a collection of gourds, the most important of which was the divination gourd mwano. It was filled with medicine for the sick. It has a long neck with a plant fiber handle and a woven leather strap. It has a plant fiber lid that is fastened to the neck with leather.

The Agikuyu were originally hunters and gatherers who subsequently turned to agriculture as their primary source of income. For home consumption, women conducted the gardening and collecting of wild fruits with conventional instruments (such as hoes, digging knives, and so on), while males did the hunting. Trade, agriculture, and livestock raising are their main economic activities nowadays. Potatoes, bananas, millet, maize, beans, and vegetables are among the crops they farm. Tea, coffee, and rice are some of the other popular cash crops farmed.

Githeri (maize and beans), Mukimo (mashed green peas and potatoes), Kimitu (mashed beans and potatoes), Irio (mashed dry beans, corn, and potatoes), Mutura (goat intestines, flesh, and blood sausage), and Ucuru are some of the most popular Kikuyu cuisines (fermented porridge made from flour of corn, millet or sorghum). Various dishes and spoons were used to serve the food. This handcrafted wooden meal bowl was used by everyone for eating dry foods.

Law and order, decision-making, ritual oath-taking, religion, and administration were all the responsibility of the council of elders (kiama). The kiama ruled over all concerns affecting the entire village.

The family and clan

The Kikuyu base their social organization on their family units (nyumba), which are extended through marriage. Several related families form the clan (mbari) and neighbourhood (itura).

The Agikuyu circumcised both boys and girls at puberty. As an important cultural practice, circumcision was characterized by celebration irua. Circumcised girls became women ready for marriage, and boys became warriors. Initiates circumcised at the same time, formed an age-set riika.  In Kenya today, female circumcision is illegal and the communities are encouraged to adopt alternative initiation rites which do not involve female genital mutilation.

The Agikuyu made shields for dancing, called ndome. They were carved out of a single piece of wood, with a hole for the arm instead of a hand grip, and were worn on the upper left arm. They were used by boys prior to their initiation as junior warriors.  Each year the boys of a particular territorial unit would choose a design, which they later used for their war shields once they had achieved warrior status.  Shields of this type became family heirlooms, though the designs might be scraped off and repainted many times as each new generation of boys prepared for their initiation.

When a young man found a suitable woman to marry, he was expected to pay bride wealth ruracio to her family. The parents of both the bride and groom engaged in discussions, exchanged gifts, and assessed whether the couple were a suitable match.  Afterwards, the elders and fathers of the groom and bride drank locally brewed beer muratina together as they negotiated for bride wealth (sheep, goats and cattle). A man could marry as many wives as he could afford. A traditional Kikuyu marriage ceremony nguracio is characterized by a great feast, songs, dance and merry-making.

3 thoughts on “THE KIKUYU OF KENYA”