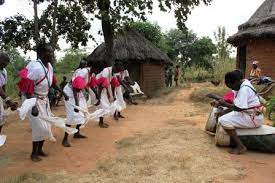 THE KAMBA COMMUNITY - HISTORY AND CULTURE

The Kamba (also known as Akamba) belong to the Bantu community and lived in the eastern region in Kenya. They speak Kikamba language and are closely related in language and culture to the Kikuyu, Embu, Mbeere and Meru. The majority of the Kamba are found in Machakos, Makueni, and Kitui Counties, an area called Ukambani, while some are found in the coastal region. Some also live in Uganda, Tanzania and Paraguay. Among the best known Kamba people are chief Kivoi, Syonguu, Prophetess Syokimau, and Muindi Mbingu, among others.

The Kamba are believed to have migrated from the Mount Kilimanjaro area, where they had settled about 1300 AD. From here they moved to Taita and the Mbooni hills between the 15th and 17th centuries.  Due to population pressures, some were forced to migrate and traveled through the plains to the coast, then up to the Tana river through Shimba hills to their current location

During the pre-colonial period, the Kamba were long distance traders. Together with the Mijikenda and the Swahili, the Kamba traded ivory, slaves, gum copra, beads, honey, bee wax and skins with the Arabs along the coast. They organized weekly caravans that travelled to the coast, where they obtained goods such as beads, iron hoes, cotton cloth, red dyes and brass wires. They also traded with neighboring communities like the Kikuyu, Maasai and Embu. Later the Kamba adopted agriculture, growing food crops such as maize, millet, sorghum and cassava. The Kamba were also known for making and selling creative wood carvings and ornaments. They sold medicinal products known to them as ‘miti’, meaning herbs, obtained from different plant species. The Kamba were hunters, famed for their pursuit of elephant, as well as for their skills in arrow working and poison-making. Today hunting is prohibited in Kenya, and perpetrators are arrested and prosecuted in the court of law.

In the Kamba society, a family (Musyi) plays a central role in the community. Men would traditionally head the family and engage in the economic activities of the community. The women, on the other hand, would work on their piece of land, so as to supply meals to their families. Mothers had the role of raising children and taking care of their homes, and grandparents helped with less strenuous chores, such as rope-making and tanning leather. Initiation through circumcision was performed on both boys and girls. Initiated girls were taught domestic duties as well as how to raise a family, while initiated boys learned skills like herding, hunting and looking after the homestead

The Kamba practiced circumcision for both boys and girls, which was the main initiation to adulthood. Circumcision was known as nzaiko, and the perfomer (usually an old man or woman) was called mwaiki.  The Kamba had two circumcision ceremonies: the first one called nzaiko nini was done when initiates were between 4 and 5 years old. The second one (nzaiko nene) was done at puberty, when the initiates were told the secrets of the community. Only circumcised men and women were allowed to marry and start a family.
Today circumcision of girls is illegal in Kenya, and communities are encouraged to use alternative initiation practices

Kamba marriage
Kamba marriages were mostly arranged by the parents, but sometimes a man was allowed to choose the woman he wanted to marry. A man who was seeking a wife would choose a woman and ascertain that she was willing to marry him.  When the suitor had made his choice, his father would go to see her father. Should his father have died, a paternal relative took his place.  If the father of the woman agreed to the marriage, the mother of the man would visit mother of the woman to ensure that she was also satisfied.  Three goats (mbui sya ntheo) were then sent to the woman’s father as a sign of commitment and one would be slaughtered. These goats would be sent with a leather halter or strap of cowhide, which would be sent back to the sender as a sign of consent. If the woman’s father had changed his mind, the goats could be returned. Payment of the bride wealth/ngasia was made according to the wealth of the suitor’s family and the terms of the agreement. Bride price (Theo) could never be said to be paid in full, because it was considered to last as long as the relationship. There were always one bull and two cows included in the bride price, and a certain number of goats. It was the number of goats that varied according to the agreement.  Nowadays, sheep or cash, or a proportion of each, may often take the place of goats. Other requirements include: leather rope (mukwa), a drum containing honey (kithembe kya uki wa nzuki), bananas, traditonal beer (muatine), among other items. Small presents to the mother of the bride and other close relatives are also customary at the time of the negotiations. After the bride wealth is paid, she is ceremoniously abducted to her husband’s home

The smallest political unit in the Kamba community was the homestead (musyi), whose authority was the father or male elders. Every homestead had a men’s outdoor fireplace (thome), where elders met and discussed serious issues. Several homesteads made a village (utui), each with its own council of elders, judges and war leaders. Several villages (utui) made a district (kivalo), which had a common ground for ceremonies, age grade transition and recruitment. The Kivalo also settled disputes between villages. The most senior elders were the religious leaders (atumia ma ithembo), who were involved in the activities of the community

The Kamba believed in a monotheistic, invisible and transcendental God, Ngai or Mulungu, who lived in the sky (Yayayani or Ituni). The traditional Kamba perceived the spirits of their departed ones, the Aimu or Maimu, as the intercessors between themselves and Ngai Muumbi Mwatwangi/Mulungu. They were remembered in family rituals, offerings and libations at individual altars

The Kamba creation story and folklore

Like other communities the Kamba also has their own traditional creation story. They believed that their god, Mulungu, created a man and woman and placed them on a rock, Nzaui, where their footprints, including those of their livestock, can be seen to this day.  Mulungu then caused a great rainfall. From the many anthills around, a man and a woman came out. These were the initiators of the ‘spirits clan’- the Aimo.  It so happened that the couple from heaven had only sons, while the couple from the anthill had only daughters. Naturally, the couple from heaven paid dowry for the daughters of the couple from the anthill. The family and their cattle greatly increased in numbers.  With this prosperity, they forgot to give thanks to their creator. Mulungu punished them with a great famine. This led to dispersal as the family scattered in search of food. Some became the Kikuyu, others the Meru, while some remained as the original people, the Kamba

Medicine men and women played a great role in the Kamba community, and each village had its own medicine man or woman. They prophesied, took part in rain making and officiated religious functions. Illnesses were believed to be sent by spirits who were angry with the living, by black magic from some evil-disposed person, or contracted in a natural way, which was regarded as the least usual. The medicine man through divination would ascertain the cause of the illness and give the right prescription. In case he was not able to, he could call an expert to cure that particular kind of illness

In the Kamba’s worship of spirits, dancing was an important feature, whether it was to heal someone possessed with a troublesome spirit, or to voluntarily get into communication with the spirit-world, to ask the spirits about something one wanted to know.  Kilume was a spiritual dance, performed by the medicine man/woman. It was believed that the dance appeased the spirits, causing the troublesome spirit to leave. Musical instruments used during the dance included the drum, and beaded necklaces with aluminium bells to create rhythm.

Music was also used during leisure time. This flute is made from Muangi (swamp) reed and was played by men as a form of entertainment. It consists of three carefully crafted holes, easily shaped to help direct the passage of air to produce sound

Visit Bethany Online School to enrol in our courses. We are currently offering African vernaculars, Math tutoring, English and German. Kiswahili language is readily offered but other vernaculars are offered upon request. Click on the next link to visit our website to see more  https://bethanyonlineschool.com/

2 thoughts on “THE KAMBA COMMUNITY”