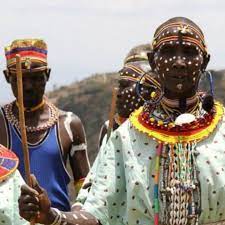 THE KALENJIN - HISTORY AND CULTURE

The Kalenjin are mostly found in Kenya. The Kipsigis, Nandi, Tugen, Keiyo, Marakwet, Pokot (also called the Suk), Sabaot (who dwell in the Mount Elgon region, straddling the Kenya/Uganda boundary), and Terik are an ethnic grouping of eight culturally and linguistically related clans or “tribes.” Kenya’s western highlands and the Rift Valley are their current home. “I tell you,” Kalenjin approximately translates. The name has been critical in the formation of this new ethnic identity among once autonomous but culturally and linguistically related tribes. The name Kalenjin and the ethnic identity of the Kalenjin can be dated back to the 1940s. It demonstrates a strong intention to gain political strength from a larger number of people

Individuals from these communities who went forth to fight in World War II (1939–45) began referring to themselves as kale or kole (the procedure of scarring the breast or arm of a warrior who has killed an opponent in combat) starting in the 1940s. An announcer named John Chemallan used the phrase kalenjok during wartime radio broadcasts (“I tell you,” plural).
Individuals from these clubs later founded the “Kalenjin” club at Alliance High School. They were a distinct minority in this famous institution in an area dominated by another tribe, the Gikuyu, with only fourteen students. To identify themselves from the Gikuyu, the Kalenjin desired an outward expression of identity and togetherness. These youthful high school students would go on to found the Kalenjin elite of the future. The creation of a Kalenjin Union in Eldoret in 1948 and the publication of a monthly journal called Kalenjin in the 1950s solidified Kalenjin identity.

The Kalenjin movement was about more than just establishing a people’s identity. During the Mau Mau emergency, the British colonial authorities supported the Kalenjin movement and financed the Kalenjin monthly journal in order to foment anti-Gikuyu sentiments. The Mau Mau uprising was a largely Gikuyu-led revolt against British colonialism that triggered a state of emergency that lasted from October 1952 to January 1960.The formation of Kalenjin solidarity and togetherness was influenced by Gikuyu battles with both the British and non-Gikuyu  tribes (including the Kalenjin).  The koret, or parish, was traditionally the main unit of political structure among the Kalenjin. There were twenty to one hundred scattered homesteads in this area. It was run by a council of adult males known as the kokwet, who were led by a spokesman known as poiyot ap kokwet. This spokesperson was known for his oratory skills, tribal law knowledge, commanding personality, money, and social standing. Although the poiyot ap kokwet was the first to speak in public, all of the elders were given the opportunity to express their views. Rather than making decisions for himself, the poiyot ap kokwet communicated the views of the group, usually in the context of a group decision.

The Kalenjin people’s first language is Kalenjin, which belongs to the Chari-Nile language family of Africa. Three dialect groups of Kalenjin have been discovered. Although all Kalenjin are supposed to be able to understand each other’s dialects, speakers of one dialect frequently have trouble understanding speakers of another. Because both KiSwahili and English are official national languages in Kenya and are taught in schools, most Kalenjin people also speak them.

Among the Kalenjin, oral tradition was and is still very significant. Folktales were used to relay cultural history prior to the invention of writing. Stories, songs, proverbs, and riddles are the four oral traditions of the Kalenjin. People and animals are frequently featured in stories, and certain animals are regarded to have distinct personalities. The hare, for example, is a cunning trickster who can get himself into trouble, the lion is brave and wise, and the hyena is greedy and destructive. Work and amusement, as well as ceremonial occasions such as births, initiations, and weddings, are all accompanied by songs. Proverbs offer vital information and are frequently cited by elders when resolving disputes or giving advice to children.
Riddles are word games that are particularly popular with children.

Traditional Kalenjin religion is founded on the belief in a supreme god, Asis or Cheptalel, who is symbolized by the sun, but is not God himself. Elat, the god of thunder and lightning, sits under Asis. Oyik, or deceased spirits, are said to intercede in human affairs and can be appeased by koros, or meat and/or beer offerings. Diviners, also known as orkoik, are mythical beings who help with rain or flood pleas.

In Kalenjin society, both boys and females must go through an initiation rite to become adults. These were traditionally held every seven years. Everyone who goes through initiation, or tumdo, is assigned to a specific age group, or ipinda. After male youths were circumcised, they were isolated for long periods of time and taught the skills required for adulthood.
Following that, they would enter a period of warriorhood in which they would serve as the tribe’s military force. Elders supplied knowledge and guidance. Although age groups no longer have a military purpose, they continue to foster relationships between men of the same generation. Female age groups have lost a lot of their significance. Only women who had given birth to children were buried after death; the rest were taken out to the bush and eaten by hyenas. The Kalenjin are all buried now, but not in a cemetery. For burial, people are returned to their farm, or shamba. There are rarely burial markers, but family members, acquaintances, and neighbors are aware of where people are buried.

The Kalenjin’s standard greeting is chamge or chamuge. When people meet face to face, they virtually always exchange a warm handshake, and they frequently grab their own right elbow with their left hand. The response is always the same: chamge, sometimes multiple times. It can be accentuated with mising, which might signify “a lot” or “a close buddy” depending on the context. A younger person welcomes someone from their grandparents’ generation with chamge kogo (grandmother) or chamge kugo (grandfather) as a symbol of respect (grandfather). For people of the same sex, holding hands after greeting is fairly usual. These people may clutch hands or lock small fingers even when walking. This behavior has no sexual connotations. These and other public expressions of affection are strongly discouraged for people of opposing sexes. Kalenjin do not use their fingers to point out items or individuals in their conversations. Instead, they pucker their lips slightly and move their heads in the appropriate direction. Farewells, sait sere (literally, “blessed time”), and warm handshakes accompany the departure of someone. People frequently walk a short distance with their visitors to keep the discussion going and to give their friends “a push.” These individuals frequently hold hands. Dating and wooing were virtually completely topics of family concern in the past. Young men and women, particularly those attending boarding institutions, now have more freedom to make their own decisions. Young people socialize during dances at town discos and cafes known in KiSwahili as hoteli. When a young man chooses a wife, he and his father’s family must still come up with an acceptable bride price payment to provide to the bride’s family. Previously, this almost completely consisted of animals, but money is increasingly being used in place of or in addition to livestock.

Kalenjin dwellings were traditionally spherical. Walls were made of bent saplings connected to larger poles and coated with native grasses. While these types of buildings are still popular, there is an increasing trend toward building square or rectangular dwellings with timber walls and corrugated sheet metal roofs. The majority of Kalenjin live in rural areas with no access to electricity or indoor plumbing. The most frequent consumer items include radio/cassette players, kerosene lamps and stoves, charcoal stoves, aluminum cooking pots,  plastic dishes, plates, and cups, and bicycles. Those who do not have access to electricity but do have televisions rely on automobile batteries for power.

Following their marriage, most men took their wives to live with them in or near their father’s homestead. Polygamy (the marriage of one man to numerous wives) was and is authorized, however most men cannot afford the costs of such unions due to the bride price. Children were traditionally viewed as a blessing from God, regardless of the manner of marriage. As a result, Kenya had the greatest population growth rate in the world until recently. Monogamous marriages (one husband and one wife) are becoming more popular, as are nuclear families (a man, a woman, and their offspring). Furthermore, younger people are expressing a wish to marry and have fewer children. This is due to the increasing expense of having many children who not only must be fed but also educated. To some degree, young women are also changing their aspirations, wanting careers in addition to being mothers.

Music and dance have always served a variety of purposes. Many work-related activities, such as herding cattle and digging fields for men and grinding maize, washing clothes, and putting newborns to sleep for women, were accompanied by songs (with lullabies). Music played an important role in ceremonial events like births, initiations, and weddings.
Traditional instruments such as flutes, horns, and drums were used to accompany these dances, which were done while wearing ankle bells.

2 thoughts on “THE KALENJIN COMMUNITY”