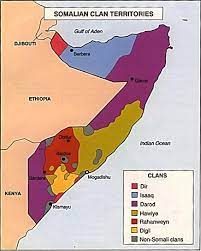 THE HAWIYE OF SOMALIA

The Hawiye clan is the greatest Somali clan family (Somali: Hawiye, Italian: Hauija).  This tribe has traditionally lived in central and southern Somalia, Somaliland, Ethiopia (Somali, Harar, Oromia, and Afar regions[3]), and Kenya’s North Eastern Province. They are also the majority in Mogadishu, the capital city.

The Hawiye, like the majority of Somali tribes, trace their lineage back to Aqil ibn Abi Talib (c. 580 – 670 or 683), a cousin of Muhammad (c. 570 – 632) and older brother of Ali ibn Abi Talib (c. 600 – 661) and Ja’far ibn Abi Talib (c. 590 – 629).  They can trace their ancestors back to Aqil through Samaale (the origin of the word ‘Somali’), the supposed forefather of northern pastoralist tribes including the Hawiye, the Dir, and –matrilineally through the Dir– the Isaq and the Darod. Although these genealogy claims are historically dubious, they do demonstrate long-standing cultural ties between Somalia (particularly, but not only, Somaliland) and Southern Arabia.

With the entrance of the Samaale in Somaliland, the Hawiye migrated into Ethiopia, claiming it as their traditional homeland[11], before descending the Shabelle Valley. The Hawiye clans of Somalia now live in rich fields along the Shabelle River in Beledweyne, Hiran, and Jowhar, Middle Shabelle, ranging from the coast of Mogadishu to the old port town of Hobyo in the arid central Mudug region. They can be found in the territories of Southwest State and Jubbaland outside of their traditional territory. The Habar Gidir Fiqishini subclan lives in Somaliland’s Sool area. Ethiopia and Kenya are also home to them.

Role and influence in Somalia

According to the 12th-century author Al-Idrisi, the Hawiye clan occupied the coastal areas between Ras Hafun and Merca, as well as the lower basin of the lower Shabelle river. Al-Idrisi’s mention of the Hawiye is the first documentary reference to a specific Somali group in the Horn of Africa. Later Arab writers also make references to the Hawiye clan in connection with both Merca and the lower Shabelle valley. Ibn Sa’id (1214–74), for instance, considered Merca to be the capital of the Hawiye, who lived in fifty villages on the bank of a river which he called “the nile of Mogadishu, a clear reference to the Shabelle river.[18]

Along with Rahanweyn, the Hawiye clan also came under the Ajuran Empire control in the 13th century that governed much of southern Somalia and eastern Ethiopia, with its domain extending from Hobyo in the north, to Qelafo in the west, to Kismayo in the south.[19]

In this period, Harold Marcus credits the Hawiye as instrumental in Islamizing the communities of what is now southeast Ethiopia and southern Somalia during the 15th and 16th centuries.[11][20]

Since sections of the Hawiyya were migrating southward before and during Gragn’s jihad, it is not inconceivable that they brought certain theocratic notions with them. Indeed, the Ajuran maintained a wakil (governor) in the region around Qallafo. This area was not only the traditional Hawiyya homeland, but also stood midway geographically between the emirates of Harar and the Benaadir, an ideal link for the transmission of political and religious ideas.

Enrico Cerulli, an Author on key Somali social development and early history, mentions the following passage on the growth and succession of the Ajuran Sultanate.

The oral sources also provide us with recurrent themes that point to certain structural features of Ajuran rule. The descendants of the Ajuraan (among which are the Gareen imams) can therefore be understood to have inherited the spiritual (Islamic) and the secular (numerical) power provided by the alliance of the first three Hawiyya “brothers”. Ajuran power reposed on the twin pillars of spiritual preeminence and Hawiyya kinship solidarity, a potent combination in the Somali cultural context. In historical terms, a theocratic ideology superimposed on an extensive network of Hawiyya-affiliated clans helped uphold Ajuran dominance over a wide region. The Darandoolle, it should be noted, were part of the Gurqaate, a clan section collateral to the Jambelle Hawiyya from whom Ajuran (and Gareen) is said to have been descended. Intermarriage among the descedants of these uterine brothers on the one hand helped reinforce the solidarity of the Hawiyya. On the other hand, competition between collateral lines was very common in Somalia, particularly where the titular leadership of a larger clan-confederation was at stake. Such a struggle for the dominant place within the Hawiyya-dominated Ajuran confederation may also be reflected in the rise of the Silcis and El Amir in the later years of Ajuran rule. Both are said to have been descedants of Gurqaate Hawiyya, as were the Abgaal Darandoolle. Thus it can be argued that the dominant groups which appeared toward the end of the Ajuran era—the Darandoolle near Muqdisho, the Silcis near Afgooye, and the El Amir in Marka—represent the partition of the Ajuran imamate among collateral Hawiyya sections. Or perhaps one branch of the Hawiyya—namely the Gurqaate—forcibly replaced another (the Jambelle) as leaders of the clan.

The Hiraab Imamate was the main successor state of Ajuran Sultanate. The reason for their rebellion was the Ajuran rulers, in the end, became extremely prideful, neglected the sharia law, and imposed a heavy tax on their subjects which was the main reason for the rebellion. Other groups would follow in the rebellion which would eventually bring down Ajuran rule in the inter-riverine region and Benadir coast.[23]

Lee Cassanelli in his book, The Shaping of Somali society, provides a historical picture of the Hiraab Imamate. He writes:

“According to local oral tradition, the Hiraab imamate was a powerful alliance of closely related groups who shared a common lineage under the Gorgaarte clan divisions. It successfully revolted against the Ajuran Empire and established an independent rule for at least two centuries from the seventeen hundreds and onwards. The alliance involved the army leaders and advisors of the Habar Gidir and Duduble, a Fiqhi/Qadi of Sheekhaal, and the Imam was reserved for the Mudulood branch who is believed to have been the first born. Once established, the Imamate ruled the territories from the Shabeelle valley, the Benaadir provinces, the Mareeg areas all the way to the arid lands of Mudug, whilst the ancient port of Hobyo emerged as the commercial center and Mogadishu being its capital for the newly established Hiraab Imamate in the late 17th century. Hobyo served as a prosperous commercial centre for the Imamate. The agricultural centres of El Dher and Harardhere included the production of sorghum and beans, supplementing with herds of camels, cattle, goats and sheep. Livestock, hides and skin, whilst the aromatic woods and raisins were the primary exports as rice, other foodstuffs and clothes were imported. Merchants looking for exotic goods came to Hobyo to buy textiles, precious metals and pearls. The commercial goods harvested along the Shabelle river were brought to Hobyo for trade. Also, the increasing importance and rapid settlement of more southerly cities such as Mogadishu further boosted the prosperity of Hobyo, as more and more ships made their way down the Somali coast and stopped in Hobyo to trade and replenish their supplies. The economy of the Hawiye in the interior includes the predominant nomadic pastoralism, and to some extent, cultivation within agricultural settlements in the riverine area, as well as mercantile commerce along the urban coast. At various points throughout history, trade of modern and ancient commodities by the Hawiye through maritime routes included cattle skin, slaves, ivory and ambergris. Soon afterwards, the entire region was snapped up by the fascists Italians and it led to the birth of a Modern Somalia. However, the Hiraab hereditary leadership has remained intact up to this day and enjoys a dominant influence in national Somali affairs.”

2 thoughts on “THE HAWIYE OF SOMALIA”