A Somali clan known as the Darod (Somali: Daarood ) Sheikh Abdirahman bin Isma’il al-Jabarti, also known as Darood, was the clan’s forefather. The clan largely inhabits the Horn of Africa’s apex and its outskirts, as well as the Somali hinterlands up to Oromia and both sides of the Kenya-Somalia border. In the Horn of Africa, the Darod clan is the largest Somali clan family.

Aqeel Abu Talib ibn Abd al-Muttalib Al-Qurashi descendant Abdirahman bin Isma’il al-Jabarti (Darod), a son of the Sufi Sheikh Isma’il al-Jabarti of the Qadiriyyah order, fled his homeland in the Arabian Peninsula after an argument with his uncle, according to early Islamic books and Somali tradition. Abdirahman is thought to have settled in Somaliland, close across the Red Sea, in the 10th or 11th century CE, and married Dobira, the Dir clan chief’s daughter. The Darod clan is supposed to have been formed as a result of this mating.
As a result, it formed matrilateral linkages with the main stem of the Samaale. The legends of lineage from aristocratic Arab families associated to the Prophet, according to British anthropologist and Somali Studies veteran Ioan Lewis, are most likely symbolic depictions of the importance of Islam in Somali society. “There is a strong historically valid component in these legends,” he says, “which is reinforced in the current practice of a Dir representative appearing at the ritual of installation of the chief of the Darod family in the case of the Darod.” Another Banu Hashim tribe with a similar mythology is the Sheikh Ishaq ibn Ahmad al-‘Alawi, who are supposed to be descended from another Sheikh Ishaq ibn Ahmad al-‘Alawi who arrived in Somaliland at the same time. There are various hagiologies in Arabic which describe Sheikh Darod’s travels, works and overall life in northern Somalia, as well as his movements in Arabia before his arrival. Besides historical sources such as Al-Masudi’s Aqeeliyoon, a modern manaaqib (a collection of glorious deeds) printed in Cairo in 1945 by Sheikh Ahmad bin Hussen bin Mahammad titled Manaaqib as-Sheikh Ismaa’iil bin Ibraahiim al-Jabarti also discusses Sheikh Darod and his proposed father Isma’il al-Jabarti, the latter of whom is reportedly buried in Bab Siham in the Zabid District of western Yemen. Sheikh Darod’s own tomb is in Haylaan, situated in the Sanaag region of Somaliland, and is the scene of frequent pilgrimages.  Sheikh Isaaq is buried nearby in Maydh,as is Sheikh Harti, a descendant of Sheikh Darod and the progenitor of the Harti Darod sub-clan, whose tomb lies in the ancient town of Qa’ableh. Sheikh Darod’s mawlid (birthday) is also celebrated every Friday with a public reading of his manaaqib. The Darod were supporters of Imam Ahmad ibn Ibrahim al-Ghazi during his 16th century conquest of Abyssinia; especially the Harti, Marehan and Bartire sub-clans, who fought at Shimbra Kure, among other battles. In his medieval Futuh Al-Habashdocumenting this campaign, the chronicler Shihāb al-Dīn indicates that 300 Harti soldiers took part in Imam Ahmad’s Adal Sultanate army. He describes them as “famous among the infantry as stolid swordsmen” and “a people not given to yielding”. 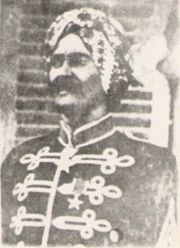 The Darood are believed to be a large Somali clan both in terms of population size and land inhabitation. The Darood constitute a big presence in the Somali Region of Ethiopia and are also the largest Somali clan in North Eastern Province of Kenya. Within Somalia, the Darood are also one of the largest clans, with traditional strongholds in the north, modern day Puntland state which is dominated by the Harti subclan of Darood. In addition, the Marehan, Ogaden, Jidwaaq, and Harti Darod members are also settled further down south in the Gedo region as well as the Middle Jubba and Lower Jubba regions of Somalia. The Darood in Somalia, roughly corresponds to the Darood’s settled within the Jubbaland and Puntland states. In Somaliland the Darood settle the eastern Sool, Sanaag regions and the Buhoodle district of Togdheer Major Darood Settlements within Somalia include Galkacyo, Kismaayo, Bosaso, and Garowe. Darood are also the largest clan in Jigjiga in Ethiopia, and Garissa in Northern Kenya.

Somali aristocratic and court titles, Majeerteen Sultanate, and Sultanate of Hobyo The Darod clan has produced numerous noble Somali men and women over the centuries, including many Sultans. Traditionally, the Darod population was mostly concentrated in the northern and northeastern cities on the Gulf of Aden and upper Indian Ocean coast in the Horn of Africa. Darod noble men ruled these settlement pockets until the European colonial powers changed the political dynamics of Somalia during the late 19th century. Before many Darods began pushing southward in the mid-1850s, the Majeerteen Sultanate and Sultanate of Hobyo held steadfast in solidly established posts from Alula to Hobyo.

1 thought on “THE DAROD OF SOMALIA”