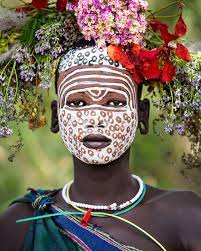 The Suri are an agro-pastoral people and inhabit part of the West Omo zone of the Southern Nations, Nationalities, and People’s Region (SNNPR) in Ethiopia as well as parts of neighbouring South Sudan. There are some 34,000 Suri in the Southwest of Ethiopia. Suri is their self-name that identity 2 groups called Tirmaga and Chai. A third group, speaking a somewhat different language, are the Baale (or Balesi, or Kachipo), who also live partly in the Republic of South Sudan and move regularly across the border, following interests dictated by trade, intermarriage, or the occasional search for better pastures in the dry season. The Suri area was conquered by imperial Ethiopian troops in 1897. The region was then formally incorporated into Ethiopia, and was the frequent target of cattle raids by highlanders and imperial troops based in the newly established villages. Their society, while now more integrated into national Ethiopian structures of administration and more under the control of the state, previously had a fairly autonomous political structure, headed by the elders of the reigning age-grade as well as a few ritual chiefs or ‘priests’, called komoru, as among the Mursi.

The Suri have a traditional belief system with a supreme sky deity called Tumu. The komoru is a mediator between humans and Tumu, acting as a contact point with the sky god that brings rain and fertility. But Suri have no public religious services of any kind dedictaed to Tumu. Ancestors of clan-lines are also recognized as having powers and as influencing the health and destiny of living people. In the past 15 years, Evangelical Christianity has gained adherents among the Suri (some 200-300), notably among those in the town of Kibish and those that left the area to study. The Suri have lived in the Ethio-Sudan border area for many generations, successfully surviving through a combination of livetsock hearding (cattle, goats and sheep), some hunting and gathering, rain-fed cultivation of a variety of field crops like millet, corn, and sorghum, and the garden cultivation of legumes, spice plants, peas and beans. Migration has been restricted due to armed conflict, state pressure and some very serious droughts which have led to food shortages and even famines in the past few decades. Since the late 1980s the Suri have also gained cash income from the sale of alluvial gold to highland traders in nearby villages. During the last ten years, this trade has suffered from strong competition from highlanders and army–related people, who have tended to push the Suri out of business.

The post-1991 ‘ethnic–federal’ Ethiopian regime has formally accorded the Suri political autonomy in a separate ‘woreda’ (district) but the leadership of this district is carefully groomed and controlled by the authorities. The state does not really consult the Suri community leaders on any matter and has appointed its own advisors. Ethiopian government gave a collective name for the Suri, Mursi and Me’en groups that inhabit the southwestern part of the country. This name is Surma. All three groups speak languages belonging to the Surmic branch of the Nilo-Saharan language family. Some authors have used the terms “Suri” and “Surma” interchangeably or for contradictory purposes. The Suri are a very interesting and tough people, who have had their share of problems with neighbouring peoples, like the Nyangatom, who are closer to the government. Tensions also existed with the Toposa in South Sudan, allies of the Nyangatom, who frequently raided their cattle. There have also been violent clashes with the Me’en. Most problems in recent decades, however, have been with the authorities. The village highlanders, of mixed descent, tend to look down upon the Suri nomads. There is a dramatic history of conflicts and clashes of Suri with highlanders and national government officials, who have a deep distrust of the Suri and saw them always as uncivilized lowlanders ‘without religion’. Men take part in a stick fighting, a combination of martial art, ritual and sport, named Donga and has traditionally been a way men impress women and find a wife. They fight with little or no clothing, and the violent clashes sometimes result in death. Battles usually take place between Suri villages, which can consist of between 40 and 2.500 people. As well as providing an opportunity to attract a partner, the fights aim to get young men used to bloodshed – which leaders believe comes in handy if they clash with other tribes. As part of their rituals, female members of the tribe have distinctive clay discs inserted into holes in their bottom lip, which are considered signs of beauty. To have the discs inserted, their bottom two teeth are removed before the hole is cut. The larger the plate, the more cows the girl’s father can demand in dowry when his daughter marries. The average man owns between 30 and 40 cows. In order to marry, he needs about 60 cows to give to his wife’s family. From delicate swirls of raised flesh to intricate dotted patterns, the scars that decorate the bodies of Ethiopia’s Bodi, Mursi and Suri tribes are more than just the sign of an old injury. They’re an elaborate part of local culture and signify everything from beauty to adulthood or even, in some cases, are simply a mark of belonging. “Using shared blades is a huge problem in the south Omo region” explains the French photographer Eric Lafforgue. “Hepatitis is starting to become a problem as workers from other parts of Ethiopia arrive to work on the new government-sponsored plantations. AIDS is also becoming a threat.”