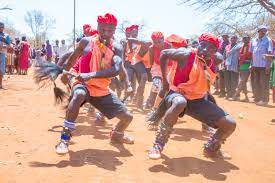 THE SUKUMA TRIBE OF TANZANIA

The Sukuma are a Bantu ethnic group from the Great Lakes region of southern Africa. With an estimated 10 million people, or 16 percent of Tanzania’s total population, they are the country’s largest ethnic group. Sukuma means “people of the north” and refers to them. The Sukuma call themselves Wasukuma (plural) and Msukuma (single) (singular)

The Sukuma live in northwestern Tanzania, on or near the southern coasts of Lake Victoria, and in various sections of the Mwanza, Mara Region’s southwestern corner, Simiyu Region, and Shinyanga Region’s administrative districts. Their home is located in the Serengeti Plain to the north. Families from the Sukuma have moved south, into the Rukwa and Katavi regions, encroaching on Pimbwe land. These Sukuma have made their homes outside of the Pimbwe settlements. Between 910 and 1,220 meters (3,000 and 4,000 feet), the Sukuma region is largely a flat, scrubless savannah plain. From November to March, the rain falls in a range of 20 to 40 inches (51 to 102 cm). Highs vary from 26 to 32 °C (79 to 90 °F) while lows at night seldom drop below 15 °C (59 °F). The population is spread out among small farm plots and sparse vegetation.

All members of the five groups in Greater Unyamwezi recognized themselves as Wanyamwezi to those outside of the “greater” territory, but used Sukuma among themselves, as they did with the Nyamwezi. When speaking to Nyamwezi, they refer to themselves as “Sukuma” (Northerners), but everyone else refers to them as Nyamwezi. The Nyamwezi–Sukuma complex can be named so because, while they were never joined, they had a lot in common in terms of mentality and style of life. They were an ethnic group fragmented into many smaller groupings, like most of their neighbors. Some suggest they were Nyamwezi people who had fled Mirambo’s incursions to the northwest, causing wildlife and tsetse to reclaim the empty territory. Unyanyembe, the Nyamwezi’s most powerful kingdom, was located on Tabora and relied on the Sukuma for meat. While two-thirds of German East Africa became unfit for cattle by 1892, and cattle in general would not recover until after the First World War, big valuable herds of cattle were preserved by the Sukuma, who were nevertheless able to avoid any substantial social change by exploiting the herds commercially. Famine became more common towards the end of the nineteenth century, according to Sukuma tradition, leaving conservative Sukuma blaming religious innovation for natural disasters and expecting regular sacrifices for the home or chiefdom ancestors. Agriculturalists, like all Nyamwezi, the Sukuma ridged their fields to accommodate the bountiful but arid environment. They had herds at the same time, which they had acquired from the Tatoga, but they were not considered pastoralists because they practiced “mixed” farming. Sukumaland also had iron reserves, which it exploited by re-exporting 150,000 iron hoes to Tabora.

The Sukuma believe in spirit possession and see the world as a whole, with all living things, natural and supernatural, interrelated.

Traditional medicine is a type of treatment that has been. The Sukuma are one of many ethnic groups who practice “zootherapy,” or the use of animals in traditional medicine. Many people in Africa, notably the Eswatini Inyangas and the Bight of Benin, feel that traditional animal-based treatments are more beneficial than Western medicine. Plants and animals have long been the foundation of Sukuma medicine; however, plant remedies are being employed more frequently. The Sukuma people have a name system that allows them to differentiate animals based on their medical uses. Healers compile a list of known ailments and their symptoms before compiling a list of herbs, animals, and their healing properties.

There is little information on the Sukuma tribes’ use of animals in their medicine because most of the research that has been done on the medicinal practices of this tribe has been plant based. A study was conducted in the Busega District of Tanzania, an area comprising the Serengeti Game Reserve and Lake Victoria, to determine which faunal resources healers use to treat illnesses within the community. Many of the traditional medicines, referred to as dawa, are no longer practiced, as many Sukuma tribe members rely more on Western-style medicine. The biggest threat to conservation in Tanzania is the legal and illegal trafficking of wild animals for pets. There are also weak policies for regulating the census of endangered animals. Traditional healers do not pose as big of a threat to conservation efforts as commercial hunters do. Unlike the latter group, traditional hunters and medicine men only hunt what they need.  Other than medicinal purposes, the Sukuma people use animal resources for things such as decoration and clothing. For example, animal skins are used for house decoration and bag

The Nyamwezi (also called Dakama, or people of the South[citation needed]) and Sukuma (also called people of the North) are two closely related ethnic groups[10] that live principally in the region to the south of Lake Victoria in west-central Tanzania. When using ethnic names, they describe themselves as “Banyamwezi” (sing. Munyamwezi) and “Basukuma” (sing. Musukuma) respectively; they refer to their home areas as “Bunyamwezi” or “Unyamwezi,” and as “Busukuma.” The term “Sukumaland” is sometimes used for the Sukuma area. The name “Sukuma” literally means “north,” but it has become a term of ethnic identification.

The Nyamwezi and Sukuma region lies between 2°10′ and 6°20′ S and 31°00′ and 35°00′ E. The Nyamwezi “home” area is in the Tabora Region and western Shinyanga Region, and Sukumaland lies to the north and east, covering the eastern Shinyanga Region and the Mwanza Region. There has been much population movement in and beyond these areas, and members of both groups have also settled on the coast and elsewhere. Sukuma and members of other groups, such as the Tutsi and the Sumbwa, are often found in Nyamwezi villages, but Sukuma villages are ethnically more homogeneous. Sukuma took over the Geita area of Mwanza Region during the colonial period, and they have expanded farther west since then. They have also moved down into Nzega District and the neighboring Igunga District, and some have migrated into the southern highland areas of Tanzania, and even into Zambia. These Sukuma movements have stemmed from political factors, such as colonial cattle-culling policies, and from local overcrowding and deteriorating soil conditions. The two areas form a large and undulating tableland, most of it at elevations between 1,150 and 1,275 metres (3,773 and 4,183 ft). There are several rivers in the region, but most of them do not flow during the drier months. The year can be broadly divided into a rainy season, from about November until April, and a dry season the rest of the year. Average annual rainfall is about 75 centimetres (30 in) for most of the Sukuma area, and about 90 centimetres (35 in) for Unyamwezi, but there is much variation from year to year and from place to place. Across the region, there is a regular sequence of soil and vegetation zones. The upper levels are dry woodland typified by trees of the Brachystegia–Isoberlinia association; these areas are often called miombo country, after one of these trees. Lower areas of grass and thornbush steppe are also common, and in Sukumaland there are large tracts of park steppe interspersed with baobabs.

HERE AT BETHANY ONLINE SCHOOL WE SEEK TO BRIDGE THE GAP BETWEEN LANGUAGE AND CULTURE . CLICK ON THE LINK BELOW TO VIEW OUR SERVICES