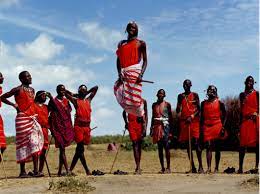 These communities are known as Highland Nilotes because they live in the Rift Valley’s highlands. They include the settlements of Iteso, Njemps (il chamus), Ogiek, and Kalenjin. Nandi, Terik, Kipsigis, Keiyo, Elgeyo, and Tugen are Kalenjin languages. The Maa language is spoken by the Il Chamus (Njemps), Ateso by the Teso, and Okiek by the Ogiek. In their settlement areas, they have traditionally pursued pastoralism and farming.

The Luo are the only River Lake Nilotic people in Kenya. They are one of Kenya’s largest ethnic groupings and speak Dholuo. They are typically found in Kisumu, Migori, Siaya, and Homa Bay counties near Lake Victoria. The Luo are famous for their love of fish and their Lake Victoria fishing traditions

The Maasai, Teso, Samburu, and Turkana are among the Plain Nilotes. Traditionally, they practiced nomadic pastoralism. They occupy a huge swath of western Kenya’s Rift Valley, which runs from Sudan in the north to Tanzania in the south. Traditionally, they are found in Turkana, Laikipia, Samburu, Kajiado, and Narok counties. The Maasai and Samburu speak Maa, whilst Turkana speak Turkana/Turkwana.

4 thoughts on “NILOTES IN AFRICA”