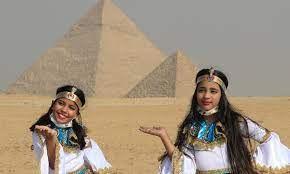 The larger population in Egypt is the Egyptians. Egyptians make 95% of Egypt’s population. Egyptians speak the modern Egyptian Arabic. On the other hand, there are the minorities such as the Berbers of Siwa oasis, Nubian of southern Nile, Bedouins, and Copts who make 5% of the entire population. The Nubians speak Nubian language while Copts speak Coptic language mainly in church during prayers and hymns.

This tribe lives across North Africa. Bedouins are ancient people who originated from the people of Arabian Peninsula. Bedouins tribe is composed of different tribes from many regions of Egypt. Few Bedouin are nomadic as they live in tents which makes it easier to migrate. Women in Bedouins culture have the responsibility to demolish and assemble the tents whenever they migrate. However, the majority of Bedouin are not nomads as they have permanent homes. Modern culture has changed the lifestyle of Bedouins. Although the children wear modern clothing, the women still dress traditionally. Bedouins began to adopt modern culture in the mid-20th century when they settled in the cities.

Berbers are also a tribe living across North Africa belonging to a minority group. In Egypt, they are very few compared to other northern countries. Berbers were named by conquerors but later they changed to Amazighen. Berbers are Muslims and speak the Berber language which is a family of different languages with closely related dialects. Originally, Berbers were not Muslims but converted to Islam after settling in Egypt.

Egypt is a highly populated country among Arab countries. It is the third most populated country in Africa after Ethiopia and Nigeria. Of its population of 93 million people, about 95% stay along river Nile banks and the Nile delta. The residents also inhibit the Suez Canal and north of Cairo. These areas are the most highly populated in the world having an average of over 3,820 people per square mile.

The government in Egypt has put in efforts with limited success, encouraging migration to new areas reclaimed from the desert. Despite these efforts, the population in the countryside keeps on decreasing as most people migrate to big towns looking for employment and better living standards. However, small populations are scattered in the desert regions and some clustered around transportation routes and historic trading areas. According to Peterson Institute for International Economics, the main problems leading to migration is the high number of graduates and unemployment.

HERE AT BETHANY ONLINE SCHOOL WE STRIVE TO CONSERVE THE AFRICAN CULTURE AND HERITAGE BY BRIDGING THE GAP BETWEEN LANGUAGE AND CULTURE. WE ARE DOING THIS BY OFFERING ONLINE CLASSES IN AFRICAN DIALECTS TO AFRICANS ABROAD. CLICK HERE TO SEE OUR SERVICES